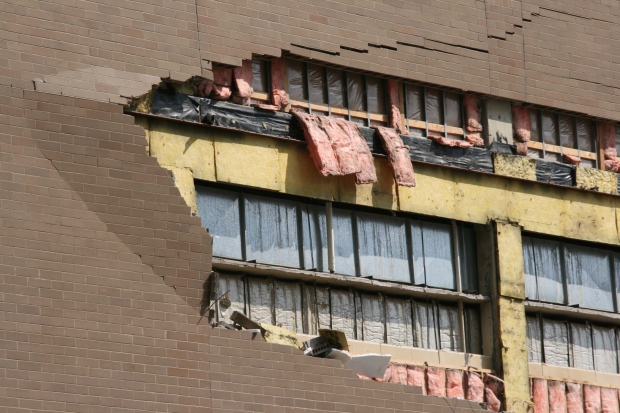 A recent event at an Edmonton-area hotel has provided us with a great example of the importance of regular building review and maintenance. Last week the Downtown Westin Hotel in the Albertan capital experienced an unusual but possibly avoidable situation when a 3-meter high by 15-meter wide section of the brick facade came crumbling down into an adjacent parking lot. Luckily the incident didn’t result in any injuries but it will definitely end up costing the hotel a lot of money for the replacement of brick cladding and lost revenue from having to move out the guests who were staying in the hotel when the wall came down.

Masonry cladding is different from other typical cladding because it is comprised of two distinct materials, bricks and mortar, and it is supported from the ground up as opposed to other materials, such as vinyl or wood siding, which are adhered throughout to the exterior wall construction. The higher the brick wall, the more important it is to regularly ensure that the wall is performing optimally through regular reviews and repairs. Typical problems to look for when reviewing masonry cladding include damaged or deteriorating mortar joints and cracked bricks.

For Stratas, the incident at the Westin not only serves as a reminder of the potential deterioration of one of the most important elements of any building but it is also a great reminder of how vital it is to have a healthy contingency reserve fund in preparation for the inevitability of a major replacement of a significant building component. Without the inclusion of proper reserve fund contributions in the annual budget, a major failure of any common property asset is likely to lead to the Strata having to enforce the collection of special levies. For many owners the collection of regular smaller-scale contributions to the reserve fund is a much more manageable approach to major project funding than having to come up with money for a large one-time special levy.

About 250 hotel guests were evacuated from the Westin Hotel in downtown Edmonton after part of the exterior back wall collapsed Sunday morning.

As of 3:30 p.m. MT, a structural engineer for the city declared that the damage to the hotel was limited to the façade of the building. A statement released by the Westin said the hotel was given the all clear from city officials to re-open Monday.

A section of the brick wall about 10 metres from the ground appeared to bulge out and collapse into a largely-vacant parking lot Sunday morning. The brickwork failure left behind a hole about three metres tall and 15 metres across.

No one was injured in the incident.

“It’s kind of lucky it’s Sunday and not Monday,” said fire district chief Randy Shakura. “The potential here was huge for injury. At this point we don’t have any injuries at all and we’d like to keep it that way.”

Most hotel guests didn’t appear to be bothered by the sudden disruption and evacuation — not even an Edmonton couple that was celebrating their wedding.

Ilia and Denise Biziaev spent their wedding night at the Westin Hotel on Saturday.

The newlyweds were hoping for a late checkout on Sunday before officially departing for their honeymoon. Instead, they received a knock on their door around noon and a firefighter telling them they had to leave the building.

Ilia Biziaev said the firefighter told them there was “serious structural damage” at the other side of the building and they would have to leave the hotel immediately. .

“Thankfully we don’t have to get relocated, but still it’s kind of frightening,” he said.

The couple laughed off the experience, saying it makes for a memorable start to their honeymoon.

“I’m not too worried myself,” said Trevor Huyd, another hotel guest. “Hopefully everyone was OK, but it’s not too big of an issue.”

“We’ll just find something else to do for a while,” said Barb Hutton. “They are doing everything to keep people safe so I don’t think there’s anything to be worried about.”

Hotel staff are working with emergency crews as well as experts to determine the cause of the collapse.

Police closed the city block around the Westin Hotel, located at 10135 100th Street for several hours. All roads were later reopened, but the alley behind the hotel remains closed.

Shakura said it was important that fire crews take precautionary measures to ensure all guests and staff were safe.

“Anytime you have a collapse, there’s always potential for further collapse,” said Shakura. “It’s a lot easier to err on the side of caution than to wait until it happens and try to get people out in a hurry.

“We’re taking it slowly. We’re relocating them in a calm fashion, and I hope it doesn’t ruin their day too badly.”

For more information on building components and maintenance tips, email us at info@normac.ca or request a quote.