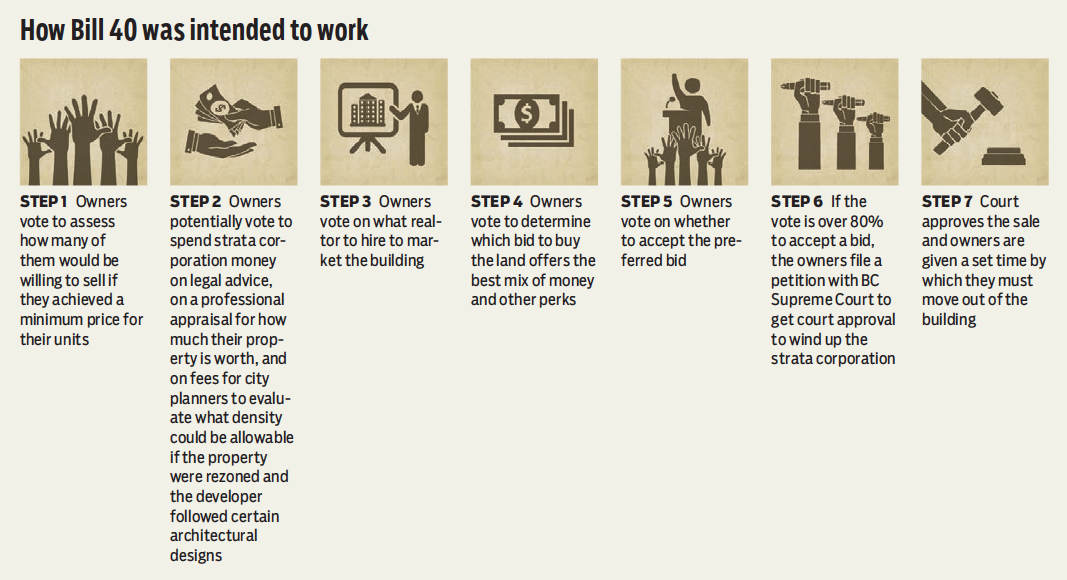 Recently, we shared information on selling a strata corporation following the introduction of Bill 40 (read about it here).  Bill 40 made it easier for strata owners to sell their complex when it has reached the end of its life cycle, but new evidence is uncovering some unanticipated consequences as well as new market opportunities.

Since the implementation, the amount of unit assembly efforts has increased significantly. This refers to selling off units in a building, owner by owner rather than as a group, to a developer who can then seek a windup under Bill 40. While the expectation was for strata owners to act cohesively under the changes, they are being counselled instead to act independently.

Some real estate brokers have begun to market unit assemblies across the Lower Mainland, and are prospecting strata corporations who could benefit from this type of windup. Those firms bear the brunt of the initial costs, including legal fees, property evaluations, etc.

The benefits for owners wanting to sell are two-fold; they avoid paying legal fees from going to court and they can negotiate their own selling price rather than being grouped in to sell as a collective.

For owners not wanting to sell, the Bill now means that they can more easily be challenged at the Supreme Court level once 80% of the strata is owned by a developer. While it may take years to settle as the developer must wait until they own the 80% majority, the developer has the means to endure the legal process. At the tail end, these owners may not get top dollar for their homes as the pressure, or requirement, to sell is imminent.

Other real estate agents and developers are avoiding this route altogether, explaining that they don’t want the bad press. “[The Developers] don’t need to have their names dragged through the mud with accusations that they are throwing people out of their homes,” says Jim Szabo vice-chairman of CBRE’s investment properties group.

A unit assembly sale could result in strata corporation bankruptcy or fractures, and internal and legal disputes. As there is no legislation yet on how to deal with this new law, strata owners should observe caution before embarking on this kind of windup.

Read more from the two part series in Business in Vancouver, by Glen Korstrom, here and here.

For more information or for a no-obligation insurance appraisal proposal, email us at info@normac.ca or call us toll-free at 1.888.887.0002.